Del-One Federal Credit Union’s Annual Meeting was held on Tuesday, May 17 both virtually and in-person at the Modern Maturity Center in Dover.  Members were able to view the virtual event, and approximately 250 members & employees attended the in-person event.  A delicious meal prepared by the staff at the Modern Maturity Center was enjoyed by all, and many door prizes were awarded. Board Directors elected included D. Steve Smith, Robert Baldwin and Kevin Mitten.  Del-One appreciates and values the guidance and expertise provided by all the amazing volunteers that continuously give of their time and talent to serve on the Board of Directors.

Both Board Chair Steve Smith and President/CEO Ron Baron spoke of Del-One’s performance in 2021. Though the global pandemic continued to affect individuals and businesses, Del-One FCU still remained strong and well-capitalized and was able to assist members and expand its community outreach efforts.  Membership increased by 0.6% to 73,577 member-owners, and the Credit Union’s member equity increased by 2.8%.  The Credit Union continued to see growth in the WINcentive program, which is designed to encourage and reward members for saving money.  The Del-One Foundation was also able to raise and donate $40,000 to numerous local charitable organizations in 2021.

Director Emeritus and former Board Chair Nancy Shevock presented Board Treasurer Jerry McNesby with the 3rdAnnual R. Bryce Breezy Brown Service Award.  This award, named for former Del-One Board member R. Bryce Breezy Brown whose loyalty and dedication truly made a difference, is presented annually to a volunteer who exhibits those same characteristics.  The recipient of this award chooses a charitable organization, and $2,500 is donated to the chosen charity. This year, Mr. McNesby chose the DTCC Educational Foundation, McNesby and McCullin Nursing Scholarship to receive the monetary contribution.

Also during the annual meeting, two Delaware high school seniors were recognized for winning $2,500 college scholarships, employees of Del-One were recognized for years of service and accomplishments, and Kathy Decker and Cindy Evans were acknowledged for their recent retirements.  West Dover Assistant Branch Manager Bree Waltz received the Teammate of the Year award, the Middletown Branch received the Branch of the Year award, and the Department of the Year honor was awarded to the Consumer Lending Department. Wilmington Branch = Branch of the Year 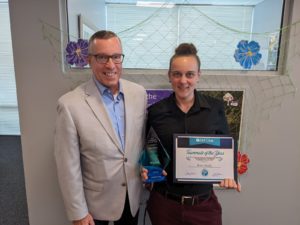